For all EU and overseas customers, please read the attached information, do not place orders directly via this website - Many thanks Read More 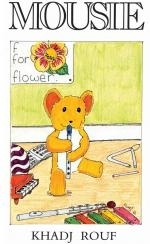 Dr Khadj Rouf is a Consultant Clinical Psychologist who has worked within the NHS mental health service since she qualified in 1994, she is also a member of the British Psychological Society's Safeguarding Advisory Group.

Mousie was written when she was a teenager, and first published in 1989. she is keen that there should be a wide range of resources available for young people, aimed at helping raise awareness about child abuse and helping them disclose if they have suffered abuse.

This book tells the story of something that happened to and teddy called Mousie that frightened him. At first he kept quiet about his fear and when he did tell someone they did not believe him. One day, however, he was able to tell someone who believed and protected him.

Mousie is intended to be read to children who may also have a secret they have been afraid to tell. Khadj hopes that this story will help those children's voices be heard.

For more information on any of our books, please feel free to contact us via the details below, or via the enquiry form: